Musubi Codes in Scarlet Nexus are special passwords and a special feature that is tied to both the game and the Scarlet Nexus anime. Musubi Codes are given to Musubi at Musubi's in exchange for special rewards. In the game, Musubi can also provide the player with codes via Brain Messages, so it is a good practice to always check your messages to avoid missing out on these codes. Musubi's cafe becomes available from Phase 2 onwards. This page covers information on the various Codes in Scarlet Nexus.

How do I Find These Codes?


The Hidden Code Quest will be held in line with the Scarlet Nexus anime. In the game, Musubi sends messages to the player via Brain Message which means players will need to check messages from her to obtain these codes. But the highlight is the Scarlet Nexus anime, where players will need to watch the anime because each episode holds one hidden code.

How do I Use These Codes?


Simple, when Musubi's becomes available from Phase 2 onwards, you can travel to the shop of Musubi via the World Map, and speak to her. Give her the code you've obtained and you'll be given a reward in exchange for the code. 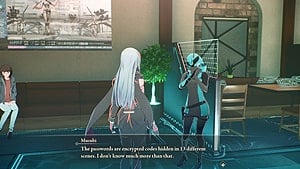